The second to last ride to finish qualifying for Paris is the 400k. This was the Athens Augusta Athens 400 on March 9th, 2019.

Riding in Athens is always great. The roads are wonderful, and around the city, the cars are used to cyclists.

I felt great at the start and was able to ride with the lead group of Ian, Betty Jean, and two riders from Memphis. The Memphis riders had a chain drop and fell off when we didn’t see they were no longer with us. I ended up riding with Ian and Betty Jean until km 120, much further than I’m normally able to before getting dropped.

The first control was 20km later and Ian and Betty Jean were just leaving as I pulled up. I had noticed my front wheel was out of true so I stopped and took some time to make sure it was still safe. It looked fine, so I just opened up the brakes a bit. 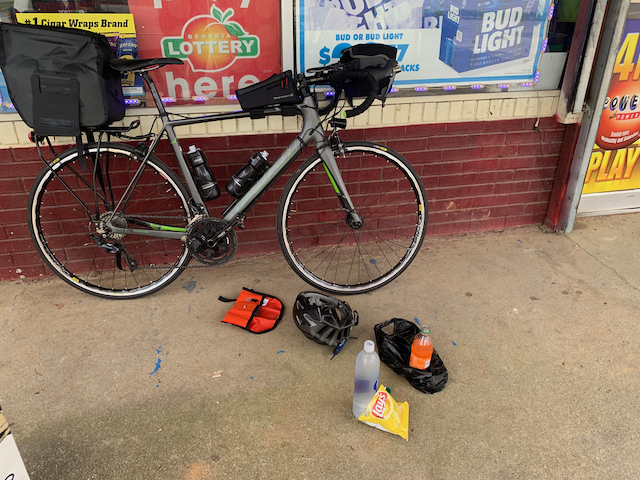 The remaining 60k to Augusta hurt and by the time I reached the turn around control I was well ready for a break. By then the two Memphis riders had caught up and we all stopped at McDonald’s and were joined by a fourth rider, Will, on a recumbant.

They left a bit before I did as I tried to find Wayne to get my card signed. The way out to Augusta was, overall, down and the way back was, overall, up. This is the elevation profile here: This was really messing with me, mentally. I had made great time getting to McDonald’s. I got there at 3:22, which is a 9 hour 200k. But I kept thinking the way back would be 2 or 3 times harder because of that elevation profile.

I had texted Marcy while we were eating. I was feeling pretty down. I started thinking that if Paris was going to be like this I wasn’t going to enjoy it at all. At the time, I was pretty sure the problem was just lack of training. I needed to get stronger so that I wasn’t so week after just 200k!

However, when you’re riding for 24 hours things never stay the same. By the time I reached the next control my legs felt 100% better. It turned out the entire course was basically rolling hills. My mood improved a lot and I thought, well, if THIS is how I feel in Paris I’m going to have a lot of fun. As I pulled into the control the riders from McDonald’s where there. The four of us decided to stick together since it would soon be dark.

The forecast was 62° all night. It ended up being 50 though, and a heavy fog / drizzle. So we were a bit cold and, by the the end of the night our gloves and socks were soaked. But all in all it could have been much worse. A week ago the forecast had called for thunderstorms with wind gusts up to 30 mph.

We ended just after 3am (technically 4am due to daylight savings time) which is a huge improvment over my last 400k. Now, just one more ride to qualify for PBP.