As I mentioned back in April, about two years ago I set a pie-in-the-sky goal of riding my bike 200 km. This goal was mainly to give me something to reach for as I met my smaller, and more realistic, monthly goals. Two weeks ago I actually met this goal! Here is how I did it.

On April 1st I was able to get back to riding outdoors, after a winter of riding indoors on the trainer. Shortly afterwards I was able to do a group ride with the local bike shop of 22 miles. I did this most weekends and continued to ride indoors during the week. I started adding on some miles after the Saturday morning group ride and by early June I was back up to being able to do 60 miles.

In mid June I did a practice ride with the group I would be doing the 200k with, Audax Atlanta. They were doing a 300k and I did the first 100 miles so I could learn how a brevet works and, of course, to get more training in. The ride was on the Silver Comet, which I always love riding on: I made a few mistakes on this ride. The first was that the day before I happened to have a nerve block scheduled. I get these every three months and they’ve really helped keep the migraines under control. I figured getting the block the day before would just be extra insurance that I wouldn’t be in pain during the ride. And while I didn’t have any head pain during the ride the logistics of dealing with a nerve block in Atlanta (45 minutes from my house and I can’t drive afterwards) and then getting to the hotel the night before the ride (this took three hours back the same direction) was just awful. In the future I’ll need to plan this better.

The last 5 miles of the ride were hard, as is always the case, and I struggled with food, and it was hot! But overall I enjoyed the ride a lot. At one point I was stopped and talking with one of the other riders and it became apparent that these guys are used to climbing a LOT more than I am. I looked it up and the 200k I signed up for had 7000’ of climbing! So I made a mental note, before the 200k I had to train for longer rides and rides with more hills. And I had to figure out what food I could eat that wouldn’t upset my stomach.

I continued riding on weekends, doing the group ride when I could and fiting rides in around family obligations when I couldn’t. Sometimes this led me to odd places. My son races Cross Country and one Saturday morning I dropped him off to run with his team and then found myself on a gravel fire road: I did a couple rides around 95 miles so that I’d be used to distance and so that I could experiment with eating different things. I ended up settling on Hammer Perpetuem as it’s easy to “eat” on the bike and my stomach tolerates it in very hot weather and for very long distances. I’m not sure how it’s possible to carry that much powder for distances over 200k though so if I set a longer goal I may need to start my search all over.

The one last thing I hadn’t considered was weather. The 200k was scheduled for July 29th. I picked this date because it coincided with my goals, but I failed to consider that this is the hotest time of the year for Georgia. The ride is in mid-GA which is even worse than Atlanta. I began checking the weather and it was predicted to be 95° and hummid, with a “feels like” temperature of 108°! I very seriously considered cancelling but figured I’d just suffer through it and then pay more attention to dates and weather in the future. In the end a cold front moved in and lowered the temperature, and humidity, significantly. It was still hot, but not 108° hot.

The ride was in Thomaston, GA which was about 2 and a half hours away. I booked a hotel for the night before and the night after so that all I had to focus on on ride day was the ride itself. The morning of the ride I was only half a mile away so I just rode over. There were 7 of us starting out. I was told that the last 30 miles are tough as that’s where most of the hills are, and there was a bridge out so they had to extend the route slightly to 133 miles. (It was now a 215k!) My plan was to go somewhat fast in the begininng, while it was still cool, and then pace myself in the middle, then I could crawl as slowly as I needed for the last 30 miles and still make the time cut off. I assumed I’d be doing the entire 200k alone.

We all started out together and I was suprised to find that we all stayed together. The forecast called for rain and the roads were wet but we didn’t get any rain until later in the day. Even then we barely got any. We made incredible time, once making it to the checkpoint minutes before the organizer, Daniel, did. We were averaging almost 17 mph, thanks to two guys in the front who were just incredibly strong. At mile 52 we reached the Whistle Stop Cafe. In preperation for this ride my wife and I had watched Fried Green Tomotoes so I took a photo: However, I then forgot to get my brevet card signed proving that I was at the stop! Luckily I remembered as soon as I left so I turned around and got it signed. But then I had to race to catch up to the group. I passed two others meaning the group was thinning down by more than just me. Of course they were going up a hill and I wore myself out catching up to them. I caught them right before the next stop at mile 59 but then we immediatly took off and I was already spent. I fell off and let them go ahead. If I kept chasing them I’d never have the energy to finish the ride. I probably should have let them go sooner. At this point the day was getting hot and I was feeling pretty beat. Luckily the roads were gorgous: I had gotten a TON of miles in at a very fast pace. I could slow down now and still have plenty of time to finish the ride. I reminded myself that my goal was to save a lot of energy for the last 30 miles. I felt like I was moving at a snails pace though. There was an optional stop (no signature requred on the brevet card) at mile 74 that was an Exxon station. I thought I’d stop there and rest for a bit and get a Coke and some Lays chips. I thought about that a lot actually. Over and over from mile 64 to 74 just about.

Amazingly when I got to Exxon the guys where all there, drinking Cokes and eating, well, not Lays but some Southern brand equivelant. It was a very Southern gas station with chairs on a shady porch. I bought my own Coke and chips and sat down to rest. It did wonders for me and we all left together.

Eventually another rider dropped and I was carefull to make a note that I should drop too or I’ll end up running out of steam again. I fell off a bit on a hill but the next stop was right there and I caught back up. I left with the group from that stop, at mile 86, but as soon as we hit the first hills, I just let them go. The second to last stop was at Dickey’s Peach Farm at mile 100. Several of the guys were there but I had no intention of leaving with anyone. I ate some ice cream, drank some water, and took a long rest. I knew the next 30 miles would be tough, but at this point I was fairly certain I could finish the ride.

There were no more stops but it was hot and I knew I couldn’t do 30 miles in one go. I planned on riding for an hour, stopping for a bit, and then finishing the ride. At mile 113 there was a gas station. I stopped and there was another rider there. We chatted for a while. He’d done several of these rides and many of much longer distances. He did something cool that I’d never seen before. He bought a bag of ice and then left it, opened, in the ice cooler. He told the gas station cashier that if any bicyclists come in to just let them know there is an open bag of ice for them in the ice cooler. I thought that was a neat idea.

My plan was to finish the final 20 miles without stopping but about halfway through I was just too hot. I stopped under a giant shade tree to rest and cool off. The co-organizer, Joe, had told me that once I see “Hilltop Farm” then I’m done with the climbing. I reached it about 5 miles later and Joe was right, that was it for the tough climbs… with one exception. The last couple of miles were in the city of Thomaston and there was one climb back up to the start / stop. It wasn’t long at all, but it seemed very steep. Afterwards Joe, one of the organizers, and I talked. I’m considering trying for longer distances next year. Certainly I struggled to finish this 200k but I can see how a 300k would be possible with a bit more training. He was very encouraging and gave great advice. The next week I received a hand written letter from him along with a sticker proclaiming me an official “RANDONNEAUR” and another “SUPER RANDONNEAUR” sticker that’ll apply if I finish a 200k, 300k, 400k, and 600k. Those distances seem impossible, but so did this one at one point. When was the last time you received a hand written letter? It was a great gesture and these are great people to ride with. We’ll see what distances 2018 brings. 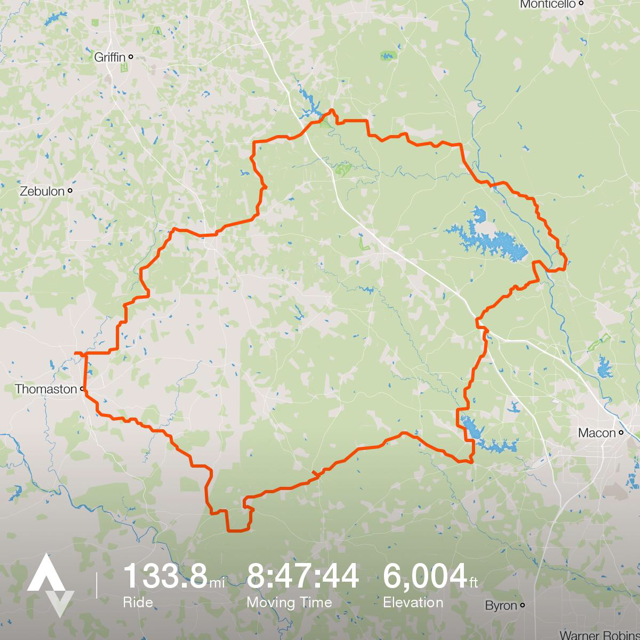